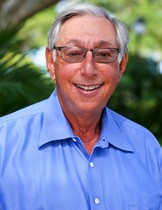 BACKGROUND- Jerry has always been involved in some aspect of Real Estate. He received a Bachelor of Science Degree in Accounting from Ithaca College and an MBA from the Financial & Administrative Institute in LaHulpe, Belgium. For the Next three years Jerry worked as a Senior Accountant for a CPA firm that
specialized in Real Estate Development, Management & Marketing.
IBM called at this point in Jerry’s career and for the next 18 years he held numerous positions at IBM including serving as The Pricing & Program Manager for IBM Europe, Middle East and Africa from 1977-1980. In 1980 jerry became the Design & Real Estate Manager for IBM’s Western Region  in Los Angeles. Four Years later it was back to New York as the Program Manager- Real Estate Development. Primary responsibility was the Development and Implementation of Joint Venture Real Estate Projects in the United States. The Phone rang and the next stop was RCA
At RCA Jerry was the Senior Vice President – Corporate Real Estate. He had worldwide responsibility for all Corporate and Operating unit Real estate operations. Jerry was then recruited by Olympia & York Properties to Become Senior Vice President- Portfolio Manager for the company’s US Porfolio. Responsibilities included bottom line performance for over 34 million sq. ft. in New York City and an additional 60 million sq. ft in the balance of the US. In 1996 Olympia & York was acquired by a number of Canadian Real Estate Development Companies and Jerry moved on.
In 1997 Jerry became the President of a newly formed deregulated electric utility company called New Energy Ventures, LLC. He was responsible for the development,planning and implementation of an effective organization to compete in the deregulated electric industry in the Eastern United States. New Energy Ventures East was formed in April 1997 and by the 1st quarter of 1999 had annual billings of over $ 500 million and controlled 35% of the relevant market place. In September of 1999 New Energy Ventures was acquired by AES Corporation a New York Stock Exchange Listed Company.

Retirement finally arrived and in 1999 Jerry & His wife Cyndi  Built a house at Ibis Golf & Country Club  and for next few years spent time  on the Rhode Island Shore Line  and their home at Ibis  .At this point Jerry became involved in a number of Real Estate Development Projects and then became a Licensed Realtor.  He has represented Buyers & Sellers of residential properties from Miami to Tampa but has devoted most of his  attention to Palm Beach county, Dade County and Martin County. Ensuring that ever Buyer and every seller that Jerry represents achieve the best possible results from their transaction is jerry’s goal.

Recommend Us to Others

View Our Featured Communities by City

Discover Schools Near Your Desired Community

You can also Find Us at

Find your perfect home in Palm Beach County by simply clicking on the city or community of your choice...